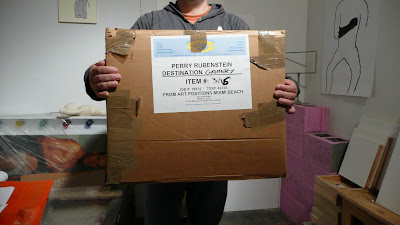 This interview took place via email over the course of the first few weeks that Bill Thelen's recent exhibition, "Minor Character", was up at Branch Gallery.

Jerstin Crosby: Ok, just to get going a little, can you talk a bit about your connection or attraction to underdogs, and 'minor characters'?

Bill Thelen: Well, I guess it all started at a very young age. We had this neighborhood bully named Johnny Bartelak. He would go around beating everybody up. I mean he was severely twisted. He would kill people's pets, steal from houses, sexually assault kids, threaten to kill your parents, and force everyone to play baseball. All the parents were at work and this kid just reeked havoc on our neighborhood. I guess this is the earliest memory of identifying with the weak and insecure kid, because I was basically one of those kids.

JC: Sounds like a character from a movie. What do you think that guy is up to these days?

BT: Last I heard from my parents was that he was the host and manager at a steak house in my old town, but it has since closed down. Before that he was in jail for killing someone in a parking lot, but he got a reduced sentence with a self-defense plea. This is just what I heard, so no telling what he is up to now. I really don’t have any contact with anyone from the neighborhood anymore and my parents have moved away.

JC: On a scale of 1 to 2, how well do you think this interview is going so far? (1 being terrible and 2 being perfect)

JC: Is this your first show as Bill Thelen where you have dropped the Lump Lipshitz cloak?

JC: Does Bill Thelen, the curator, curate the artist Bill Thelen, or vice versa? Tell me if these questions are too terrible, its kind of difficult interviewing you, because it just is.

BT: Everything I do is intertwined in one way or another. In the grand scheme of things I really don't consider myself an artist or a curator. I'm still not sure what it is that I do. I hate those introductions at parties or dinners where the first thing people ask you is what you do. I always answer "as little as possible" and hope that they move on to someone else. But getting back to the question, I definitely curate my "projects" in my head, which are sometimes as Bill Thelen, sometimes as Lump Lipshitz or part or TeamLump or some other name I work under.

JC: I have seen a lot of your work, as part of group shows, and as part of TeamLump, but 'Minor Character' is the first time that I have gotten to see a solo show of yours. It's funny, and amazing, that even your solo shows have a 'group show' aesthetic, except everything congeals and compliments the other work, in a way that is almost impossible to do with a group show. I'm not saying everything makes perfect sense but your individual works seem to even go well together when they otherwise shouldn't.

BT: I am semi-conscious of the connection of the pieces, but I don't really try too hard to make things work as a cohesive unit. I have always been interested in disjointed narrative structures. People always make a story out of anything, so I prefer to let the spectator do the work. I'm just supplying the props, characters, and sets.

JC: What are your thoughts on this?

BT: There are two things I am responding to: 1- Henry Waxman is an awesome dude. Bald, strong, democrat, liberal, and Jewish; all things I hold close to my heart. 2 - I love the Wall Street Journal illustrations and would love to add this one to my collection. May I have it?

JC: I will sell it to you for the price of one unit of diet pepsi max.

BT: I think TeamLump should be sponsored by Diet Pepsi Max. Look into that. I will pick up a case tonight!

JC: Do you know if Diet Pepsi Max comes in kegs? And, if so, how does that relate into the meaning of all your artwork?

BT: It's all about positive energy, youthful synchronicity and telekinesis. At this time I do not believe that Diet Pepsi Max is available in the "keg" format.

For more information on Bill Thelen, visit www.branchgallery.com
Posted by Team Lump Sucks Gazzette at 10:15 AM